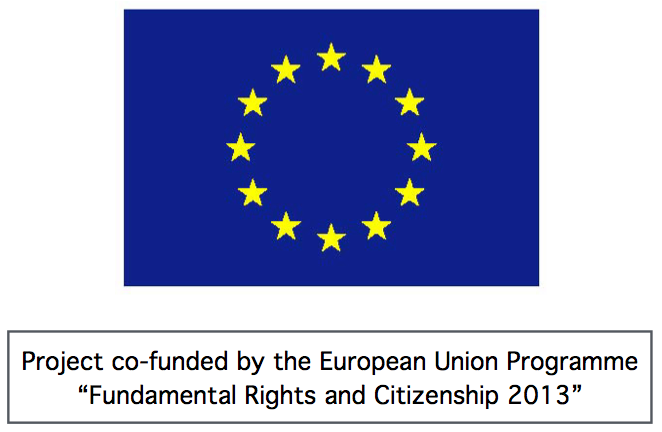 The chief purpose of the “Don’t knock on the wrong door: CharterClick! A user-friendly tool to detect violations falling within the scope of the EU Charter of Fundamental Rights” project is to create a set of tools that will assist victims of fundamental rights violations, lawyers, national judges, ombudspersons, equality bodies and other national human rights institutions in determining whether the Charter of Fundamental Rights of European Union can provide protection in a specific case. The project is supported by the European Union under the “Fundamental Rights and Citizenship” Programme (JUST/2013/FRC/AG).

Since its upgrading to the status of EU primary law on 1st December 2009, the Charter has become increasingly integrated in the everyday activity of the Court of Justice of the European Union (CJEU) and of the national courts of the EU Member States. According to the annual reports on the application of the Charter published by the European Commission since 2010, the number of decisions where EU courts have referred to the Charter doubled from 2011 (43) to 2012 (87); in 2013 they were 114, almost three times the number of cases of 2011. Preliminary references where national courts referred to the Charter rose by 65 % from 2011 to 2012 (27 versus 41); in 2013 the number of referrals remained the same as in 2012 (41). One must add to these numbers all cases where national courts make use of the Charter without submitting a reference for preliminary rulings, as well as cases where the Charter is applied by national human rights bodies.

At the same time, however, the reports of the European Commission and the case law of the CJEU show that thousands of individuals have tried to invoke before courts the protection of the Charter in cases outside its scope of application. In these cases, the Charter may be used as a source of inspiration by domestic courts, which may also seek to advance a new interpretation of the national instruments of protection based on its provisions. Nevertheless, these cannot apply to the case as binding rules and national courts cannot rely on the peculiar techniques that allow overcoming a conflict between EU law rules and national law. A search in the two main EU law databases, Curia and EUR-Lex, returns dozens of preliminary references (originating from both “new” and “old” Member States) where national courts referred questions in cases falling outside of the scope of the Charter.

As highlighted by former Commissioner Viviane Reding, “the first result of this ‘knocking on the wrong door’ exercise is an understandable sense of frustration” (XXIV FIDE Congress, 2012). At the same time, the lack of knowledge about the scope of the Charter inevitably entails the risk that that it may not be applied in cases in which it should.

The project partners will develop an Admissibility Checklist that, in combination with the cases collected within the project’s Database, will aim at making it possible to establish whether a case involving the violation of fundamental rights falls inside or outside the scope of the Charter. Besides, the partners will elaborate a document with Practical Guidelines on the application of the Charter, and a Document on the Best Practices of the National Human Rights Bodies. These tools will be tested in a series of training events that will be organised in 5 different Member States (France, Germany, Italy, Sweden and United Kingdom). Upon the Project’s completion, all tools will be made freely available in this on-line platform (CharterClick!).

The tools elaborated and implemented within the Project will therefore contribute to contrast the sense of frustration and distrust towards the Union that victims of fundamental rights violation experience when, owing to the lack of knowledge on the Charter, they seek protection based on its provisions in cases outside its scope. It will also reduce the risk of losing money and time that is an almost inevitable consequence in those situations. Both effective protection of fundamental rights and smooth administration of justice will ultimately be enhanced.

The Project, which will run from February 2015 to January 2017, envisages close cooperation between 7 highly qualified academic institutions, an institute specialised in legal informatics and a broad set of bodies representing victims of fundamental rights violations from 11 Member States. It will unfold through three strictly interrelated activities.

1) Research activities – months 1-14: the academic partners will collect relevant national and European cases and re-elaborate them, in close cooperation with the associate partners. Clear examples for situations in which the Charter applies will be developed and uploaded in the Database. Based on the case law and decisions of ombudspersons, the applicant will draft both the Practical Guidelines and the Admissibility Checklist (which will take inspiration from the checklist of the ECHR).

2) Technical Activities – months 8-24: ITTIG will design, develop and implement the on-line platform. Its involvement in the Steering Committee will ensure that the most appropriate technical solutions to support the tools are identified.

3) Testing, training and dissemination activities – months 15-24: the partners will organise two series of workshops aimed at testing the tools and at training qualified operators to use them. The Final Conference will also contribute to expanding the circle of the said users.

Updated information on the development of the project will be regularly provided in the project website (www.charterclick.eu). However, anyone interested can contact the Project Coordinator (adelina.adinolfi@unifi.it) and the Project Manager (nicole.lazzerini@alice.it) for further information.